Since October 2020, Adobe has discontinued PhoneGap Build and ended investment in PhoneGap, so PhoneGap Build cannot be used to build WP-AppKit apps anymore. To address this issue, since version 1.6.0 WP-AppKit allows to build apps directly with Cordova tools, or to use the Voltbuilder online service.

Here we will see how to configure Cordova and how to use it to build WP-AppKit Android apps. Cordova first install is not really straight forward and what you are about to read is obviously not exactly a 5 minutes tutorial but the great advantage of building apps with Cordova is that you can do it directly on your local computer without depending on an external online service.

The goal of this tutorial is to build a WP-AppKit app with Cordova, but it can help anyone who wants to build an hybrid app (HTML/CSS/Javascript based) with Cordova as most of the steps described will be the same.

All installation instructions in this tutorial have been tested on linux platform (Ubuntu 18.04). You can find more general information about Cordova installation on the Cordova website : “Get started” and “Android Platform specific configuration“.

Setup Cordova on your local computer

The first requirement to run Cordova is to install nodejs and npm:

Cordova requires that you run last version of nodejs. Some linux distributions (like Ubuntu) install quite old nodejs versions by default. You can check the installed node version by running:

If the version is inferior to the last LTS version of node (that you can check here, currently v12.19.0 when writing this tutorial), you must update your node version so that Cordova works. The easiest way to do so is to use the “Node Version Manager” nvm:

Before installing Cordova itself, install the Android SDK which is required by Cordova to build Android apps.

Here we use the “headless” (lighter) version of the jdk because we don’t need graphical interface, but you can install “opendjk-8-jdk” instead if you need a more general SDK version.

Edit your /home/[your-user]/.bash_profile file and add the Android SDK environment variables like so:

then load this config with:

We can now use the sdkmanager command to install the required Android packages: “Android Platforms SDK” and “Android SDK build-tools”, like so:

And this is it, the Android SDK is installed and configured, we can now install Cordova.

Before trying to build a WP-AppKit app, try to build the default Cordova test app to see if Cordova is installed correctly.

Create a new directory where you will create your Cordova projects. Here we will call it [my-cordova-projects-dir].

(If you encounter a parsing error at this point, it is probably because you need to update your nodejs version: see first step of this tutorial to do so).

The first build can be a bit long as new libs are downloaded and installed but if everything went well, that’s so cool, you just built your first Android app on your own computer 🙂

You can find the app’s .apk in the directory that’s indicated at the end of the Cordova build log, send it to your phone and install it. This should run the default Cordova “Hello World” app.

Build a WP-AppKit app with Cordova

Export your app as a “Cordova template”

On WordPress side, in your WP-AppKit app edition panel, choose the platform “Android – Native – Cordova export”, and configure your app theme and app components as for any WP-AppKit app (see Getting Started).

Cordova specific config must be set up in the “Cordova” box (App name, App ID, etc), as detailed in our “Getting Stated – Build native app” section. 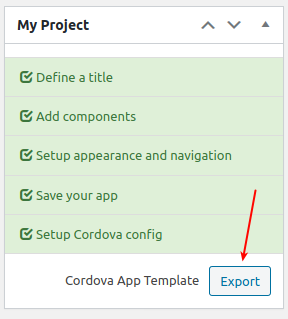 We are now going to use this Cordova template (zip file “cordova-template-export-[app-slug]-[app-version].zip“) that you just downloaded to create and build our WP-AppKit app’s Cordova project.

Unzip the Cordova template zip file, with your favorite zip archive manager or with command line (here we unzip into a directory [my-downloads]/template-[app-slug]-[app-version]):

Go to the newly created Cordova project directory [app-slug]-[app-version] and add Android platform. This will parse the config.xml and import the  Cordova plugins required by the WP-AppKit app:

At his point if you see some (yellow) warnings in logs, run the following until you don’t have any more warnings:

Then build your app with:

Get the resulting .apk from the last line of logs, send it to your phone (via email or your preferred online file storage service for example), install it and enjoy your fully manually built app!